Ultrasound waves (2 MHz - 10 MHz) are commonly used to detect flaws in engineering materials, however they can also be used for the measurement of stresses, applied and residual. The speed of ultrasound waves travelling through a material are affected by the direction and magnitude of the stresses present, which is called the acoustoelastic effect. Therefore the magnitude and direction of the stresses present within a material can be calculated by accurately measuring the change in time-of-flight of an ultrasound wave traveling through the stressed and unstressed regions of that material. For example, a stress of 1MPa in aluminium corresponds to a change in time-of-flight of roughly 1.7 ns. The acoustoelastic effect is most sensitive when the propagation path and particle motion of the ultrasound wave are parallel to the direction of stress being measured.

It is important to note that:

For sub-surface stress measurements, critically refracted Longitudinal waves (Lcr) are used, which travel just beneath and parallel to the specimen surface.  Lcr waves are transmitted and received by attaching the transducer to a wedge of the correct inclination for the specimen material tested, as defined by Snell’s Law.

The Lcr wave has the greatest sensitivity to stress due to both the propagation path and particle motion of the ultrasound wave being the same as the stress direction measured, i.e. the stresses acting in the direction between the emitter and receiver. 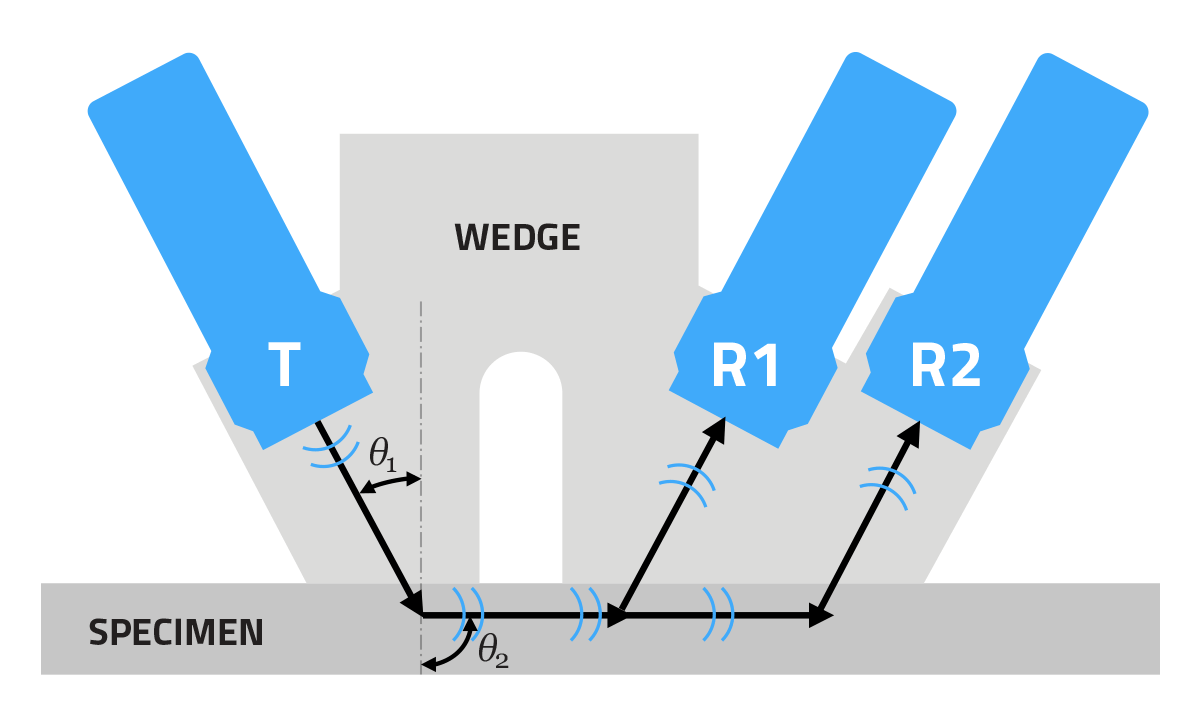 Both Longitudinal and Shear waves can be used to measure the average stresses acting through the bulk of the specimen material in either the pulse-echo or transmission configuration.  For through-thickness measurements it is essential that the measurement surfaces of the specimen are parallel. 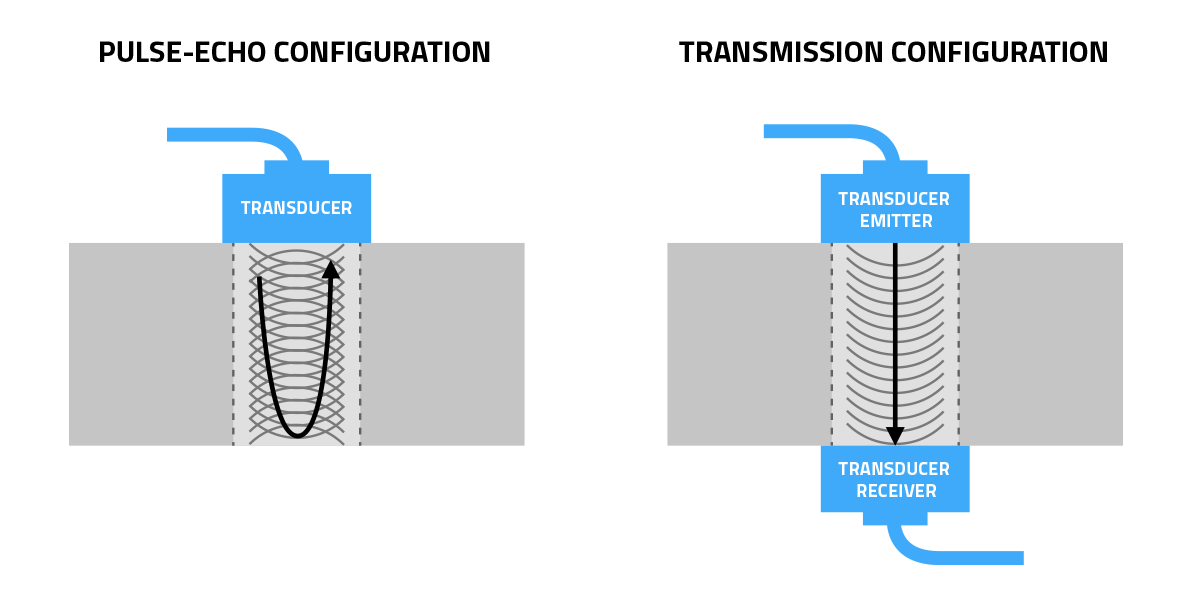 Longitudinal waves are used to measure the stresses acting in the through-thickness direction, i.e. in the direction of wave propagation and particle motion. Whereas Shear waves are polarised so that the particle motion is perpendicular to the direction of propagation and so can be used to measure the stresses acting parallel to the surface of the specimen in the direction of the particle motion.  The more advanced technique of Shear wave birefringence uses two shear wave transducers acting across the thickness of a specimen to provide concurrent time-of-flight measurements for the stressed and unstressed states, assuming it is a homogeneous, isotropic material. Through-thickness stresses can be accurately and practically measured through specimens of up to 150mm thick

Changes in applied stress and temperature can be corrected for, however changes in the microstructure of the specimen material is very difficult to account for.  Therefore measuring within the same component, or an identical component, before and after residual stresses are present is the best method of keeping microstructural changes to a minimum and so providing accurate results. Microstructural changes affect the acoustoelastic coefficient, Lij, of the material, which is used in the final calculation of the applied and/or residual stresses thus:

Where Δσ is the change in stress, E is the material Young’s Modulus and t0 is the time-of-flight in stress free conditions. 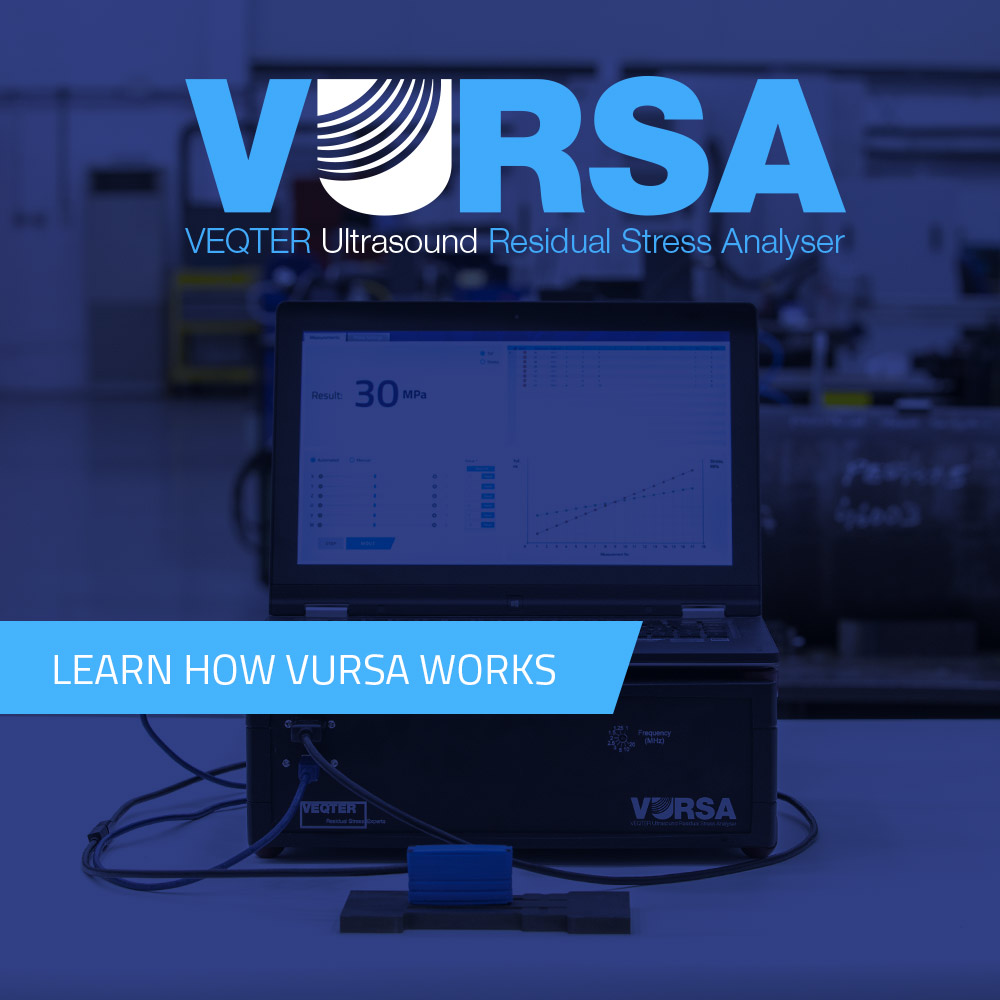 Advantages of the Ultrasound Technique:

Disadvantages of the Ultrasound Technique: