Created in 2004 as a spin-off from the University of Bristol, VEQTER has been helping the engineering industry worldwide with its unique experience and capabilities in the field of residual stress measurement, analysis, and training.

In the early 1990s, the Deep-Hole Drilling (DHD) residual stress measurement technique was revived and subsequently developed at the University of Bristol under the supervision of Professor David Smith with substantial funding and support from the UK Nuclear Industry. By the early 2000s, the technique was providing accurate and robust results helping to demonstrate nuclear plant compliance according to safety audit requirements. Also, the DHD technique was beginning to play an important role in many collaborative UK, EU, and industry-funded research projects (e.g. ELIXIR, ENPOWER, INTEGRITY, NET).  With the technique gaining increased credibility and maturity it was clear that the commercial demands of the worldwide engineering industry could not be met by a university research group, hence VEQTER Ltd was formed on 12th May 2004. 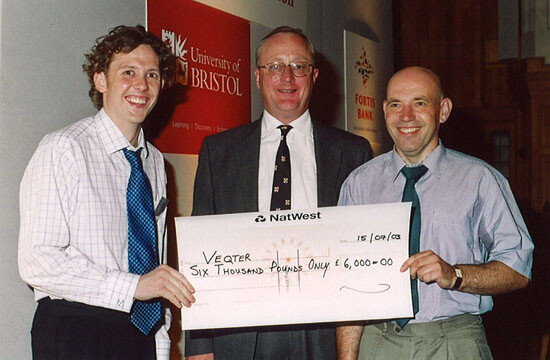 Co-founded by Prof. David Smith and Dr. Ed Kingston, and with the support of the University of Bristol, VEQTER started providing the commercial DHD measurement service for the engineering industry worldwide under an exclusive license agreement.  Ed moved from the University to operate and run VEQTER full-time whilst David remained within the University to continue leading its research in the wider field of engineering mechanics and providing assistance to VEQTER as/when required. The DHD operations of VEQTER continued to expand with new clients and new team members. In June 2007 Dr. Chris Truman (now Professor) joined the Board of Directors to expand the services provided to include consultancy and training in the field of residual stresses.  Chris’s arrival was the catalyst in organising our inaugural Residual Stress Measurement Workshop in 2008 with invited expert speakers from around the world providing a 4-day tutorial workshop on the main residual stress measurement techniques.  Following the success of the Workshop in 2008, VEQTER and the University of Bristol have organised a further three workshops keeping the engineering community up-to-date with recent advances and new insights.

Since 2008 VEQTER has invested significantly in expanding its measurement operations beyond DHD and now provides a wide range of expert measurement services which include: Centre-Hole Drilling, DHD, Neutron Diffraction, Ring Coring, Sachs Boring, Slitting, Synchrotron Diffraction, and X-ray Diffraction.  VEQTER has also just launched the World’s first Residual Stress Database allowing users to store, sort, and compare data from within their own records and against data in the public domain.  The database will promote increased collaboration across industries and a greater understanding of residual stresses and their measurement.

Embedded within the University from the start (although two separate legal entities) VEQTER and the University’s Solid Mechanics Group have a symbiotic relationship ensuring the two teams are at the forefront of engineering research and continually striving for technical excellence.

What’s in a name?

VEQTER (pronounced as “vector”) is an acronym meaning “Verifying Stress Quantities Through Strain Release”, using artistic license.  The original logo contained the Greek letters for stress (σ or ∑ in uppercase as used here) and strain (ε) to provide the “E”s where required, hence:

The phraseology used for the name was the basis on which the Company was founded, i.e. measuring (or more usually verifying FEA predicted) residual stresses using the Deep-Hole Drilling technique which is a mechanical strain release technique.